In The Afterlight by Alexandra Bracken 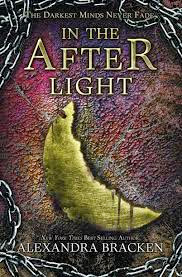 ***The following synopsis and summary contain spoilers for The Darkest Minds and Never Fade.***

In the final instalment of The Darkest Minds trilogy, Ruby and the other members of the Children's League that survived the bombing, travel to the Ranch, one of the League's other locations. The remaining adults of the League are against Psi kids (other than Cate), so Ruby and Liam's brother, Cole, for their own organization. Ruby tries to formulate a plan to get all the other Psi kids out of the so called rehabilitation camps, showing America how they were abused, as well as uncovering the cause of IAAN. But not everybody agrees with the plan that Ruby and Cole have formulated. Others have their own idea of a plan. Will Ruby be able to execute her plan?

In The Afterlight gave us a satisfying ending to this amazing trilogy. There were no loose ends, unlike some other series that I have read (*cough* Champion by Marie Lu *cough*). Plus the ending was fairly happy unlike other novels (*cough* Allegiant *cough*). It was just as action packed as the last two books and we saw some more amazing character development. If you haven't read In The Afterlight, let alone The Darkest Minds and Never Fade, go pick it up, these books are amazing. And don't come back until you have read them because there are SPOILERS ahead.

Can I just say how happy I was to see Zu turn up! Just what I was hoping for. I liked her relationship with Vida. At first Vida wasn't very nice to Zu, Vida became just like a big sister to Zu. I loved the scene where they were dyeing their hair. I thought that was a nice touch. And when Zu finally spoke for the first time in the series, I was quite happy. I thought she might when Vida talked to her about speaking.

Cole played a huge role in this book. He helped Ruby lead the group of kids at the Ranch. They ended up spending a lot of time together, and I really think that hurt Liam and Ruby's relationship. Cole was always putting Liam down as well. I was kind of annoyed with Cole, so I wasn't that sad when he died. Although I was glad when he finally told Liam that he was a Red, I think that improved their relationship a bit.

I was also glad that Liam and Ruby finally talked about Ruby erasing Liam's memory. I was just waiting for that to happen in Never Fade and then in In The Afterlight. I was happy that they were on the same page again after doing things behind each other's backs and not talking for each other for a while. I can't believe that Liam didn't tell Ruby about bringing Alice in to help with the media side of things. I found that, and Alice, really annoying.

Speaking of new characters, let's talk about Lillian Gray. I thought that I was going to like her, but once Ruby fixed whatever Clancy did to her, she became kind of annoying. We found out the cause of IAAN and learned that the so called "cure" was not really a cure. I thought that the cure would have been something completely different, not some implant in the brain that didn't really solve the problem.

In this book, we think that Ruby actually has Clancy under control for the most part. But that's not the case. We learn that the cause of Ruby's sleepwalking was because of Clancy's influence. And of course he used her to call the PSFs and to tell them to look out for Cole when he and Liam were out on a mission. HUGE plot twist.

After that little episode with Clancy, Ruby leaves for Thurmond so that she can put her plan to set the kids free into action. I loved how she was able to influence the PSFs so that they marked her down as a Green again, she was in complete and utter control. I also loved how she and Sam (a friend from the first book who's memory she erased) made up. I was really happy about that. And after a few days, she finally was able to get to the Control Tower to shut down Thurmond's system.

I absolutely loved the ending. Like I said above, there were no loose ends and it was reasonably happy. Thank you Alexandra Bracken! All the kids were released from the camps and were able to join their families once again. I loved how Ruby was able to get back together with her grandmother and even her parents. I was so glad that everything was resolved, even the issues with the government. Also, I thought that Ruby was wise to erase Clancy's memory. Now he can't mess any more things up. I also really loved that the book ended with Ruby, Liam, Chubs, Vida and Zu driving off in the car. Oh, and Chubs and Vida, who else saw that coming?

Overall, this book wrapped up the series perfectly. I have love this series and I am sad to have finished reading it. Although I'm sure I will reread it. One of my all time favourite, if not my favourite series with some of my absolute favourite characters.
Posted by Unknown at 22:53

Harry Potter and the Half-Blood Prince by J.K. Rowling